Fares Ghattas…a Milestone in the World of Luxury, the Global CEO of The Luxury Network the world’s leading luxury affinity marketing group; creating partnerships between the world’s most prestigious luxury brands operating in 37 cities.

H.E. Fares Ghattas has been named Head of Mission Middle East for the Diplomatic Council in 2018.

He has developed thousands of strategies for many luxury companies and built an international HQ team specialized in high-end areas such as finance, motorsport, nautical, health, and beauty, aviation, real estate, travel, jewellery and watches, entertainment and fashion, among others. Q-Business Magazine called his work “brilliant and one of the most interesting people working in the luxury business”.

He has been also a long partner of Media Consulta ( MC Group ) developing all the different forms of communication to develop integrated campaigns that are tailored to various clients’ needs mainly in Qatar and Turkey since 2010.

Fares Ghattas graduated from the Lebanese American University with a degree in business management, then he took control of his father’s real estate construction firm diver for property development sal and changed the company’s name to FG Realty and shifted its focus to real estate brokerage and property management.

He then travelled in 2005 from Beirut to Qatar and became well known in the real estate business as the man who sells luxury real estate and since then his love for luxury has started.

In 2016, Fares Ghattas was honoured by IIMSAM the Intergovernmental Observer to the United Nations Economic & social council the title of goodwill ambassador due to his fundraising/philanthropic acts, and interest in eliminating malnutrition.

H.E. Fares Ghattas has been interviewed by publications such as Robb Report, BBC, Contour of Luxury Magazine, Q-Business Magazine, Alem Magazine, Harayer, Blerrp, Arabian Gazette, Gulftimes, Horizon & Beyond Magazine and many more. Q-Business Magazine named him “brilliant and one of the most interesting people working in the luxury business”. 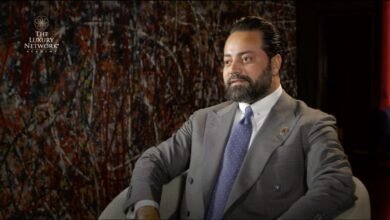